Ouch! I am not sure I have problems with video game tattoos (I would never get one). But, those are just straight up ugly tattoos, regardless of what they were of.

If you *had* to get a video game tattoo what would it be?

I think I would have to go with an Ultima cover, maybe Serpent Isle or Warriors of Destiny.

What about everyone else?

--Raz.
by Horprodukt
It would have to be something timeless, if that's possible in gaming? So i'd go classic gaming. Some of the tattoos featured in the clip are classic/retro gaming related, but tattoos of controllers? Strange.

I'd want to be paid as well to get a "Nintendo" tattoo.... the guy's a walking advert.

Some sort of graphic symbol perhaps? The closest to tasteful would be the PacMan on the arm? Hard one really. I wouldn't do it myself.
by PristineSteam
My uncle once joked about getting a tattoo of flies on his butt. Those tattoos of a company name seem almost as bad as that. I would probably never get a tattoo of anything, but if I had to get a video game tattoo . . .

I would probably do a visual "remix" that portrays a video game character in a very different style than the original, like Lara Croft in an ukiyo-e style, or an angry biker Link smoking a cigar, or Pikachu as a muscular, crazy pimp.

Or maybe I'd do something from The Secret of Monkey Island.
by Harmik
I dont think I'd really do it unless I was really drunk one night and happend to walk buy a tattoo parlor but the Intellivision running man.
by Achilles
Not specifically gaming related but I just go this tattoo last month. 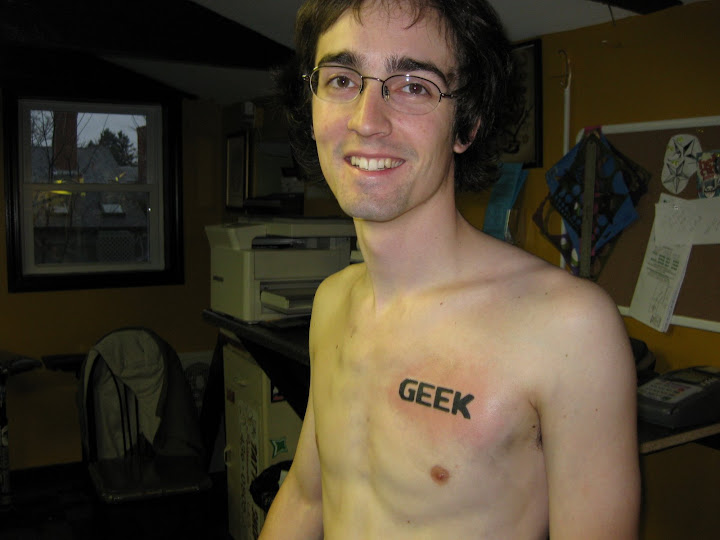 Nice tattoo! I don't think I am brave enough to get one...